The next public meeting of the Civic Design Review (CDR) Committee is scheduled for 1:00 p.m. on Tuesday, September 01, 2015 in Room 18-029 of the One Parkway Building, 1515 Arch Street, Philadelphia, PA. The meeting agenda is attached.  Licenses & Inspections (L&I) has informed the City Planning Commission that the following project must be considered and assessed:
400 Reed Street, Philadelphia, PA 19147

The Agenda for that meeting is: 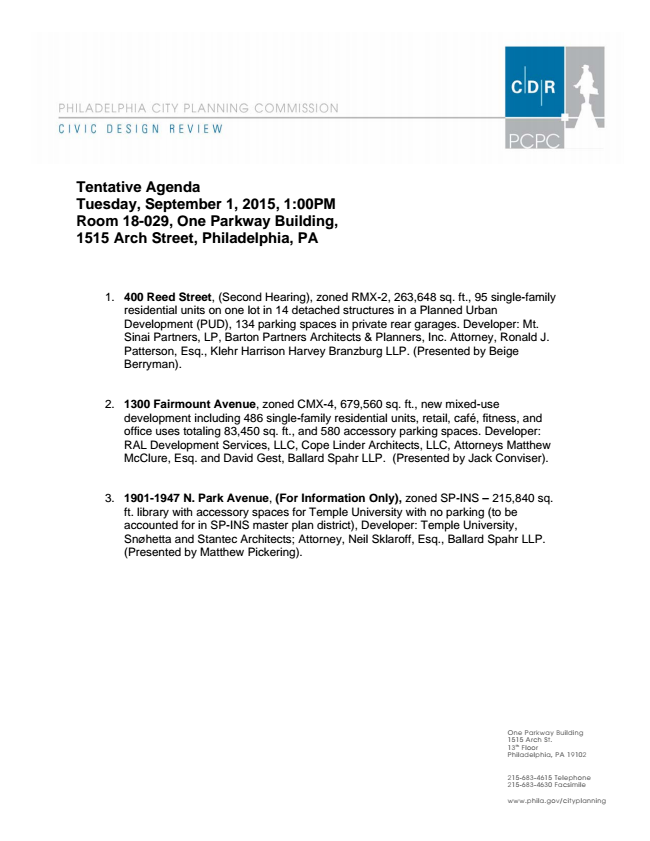 All members, residents, and neighbors interested in the development of the Mt Sinai property are welcomed to attend

Commissioner of Licenses and Inspections

Pursuant to Section 14-304(5) of the Philadelphia Zoning Code, the Civic Design Review (CDR) Committee of the City Planning Commission completed the required review of a proposed residential building project at 400 Reed Street.

The site is about 3 acres and the proposal is for 95 residential units, in 14 structures with 134 garage parking spaces. The proposal includes private driveways and 4 landscaped courtyards that function as rain gardens.

The CDR Committee recognized that the addition of the pedestrian walkways from both Reed and Dickinson Streets improves the site plan, but their narrow width prevents them from being inviting features. The Committee had concerns about safety and suggested that the landscape buffer be eliminated and windows added to the side elevations of adjacent buildings. These improvements would allow the walkways to be wider and to feel more comfortable.

The CDR Committee requested at the August review that the quality of materials of the rear elevations of the houses be improved. No changes were submitted for the September review. Much of the public realm within the site design suffers from the lack of design of the rear elevations and rear drives. For example, the vistas created by the courtyards are terminated by inadequately designed rear elevations. Pedestrian and bicycle conflicts are possible because of the unarticulated driveway space and the dominance of parking garage doors.

The CDR Committee repeated their recommendation from the August review to locate the automobile entrance on Reed Street because this street should act as the major circulation route into and out of the site.

The CDR Committee expressed concerns with the placement of street trees. Walking zone pinch points between tree pits and stoops should be avoided and overhead wires should either be avoided or placed underground.

The CDR Committee recommended removing the grass planting strip because successfully maintaining plants in such a confined space is difficult.

The CDR Committee recommended that proposed sustainable features employ a standard rating system so that their impact can be more accurately assessed.

This project prompted the CDR Committee to voice concerns about the effectiveness of the CDR process if a Master Plan has been approved prior to design review. Design discussions in a public forum have the largest impact on a project when considered at the beginning of the development process. The Committee recommended amending the sequence of the process of Master Plan approvals so that the City Planning Commission can be informed by the CDR Committee’s comments before considering approval a Master Plan district.

In conclusion, the Civic Design Review process has been completed for this project. Please contact me if you have any questions about the Committee’s action.