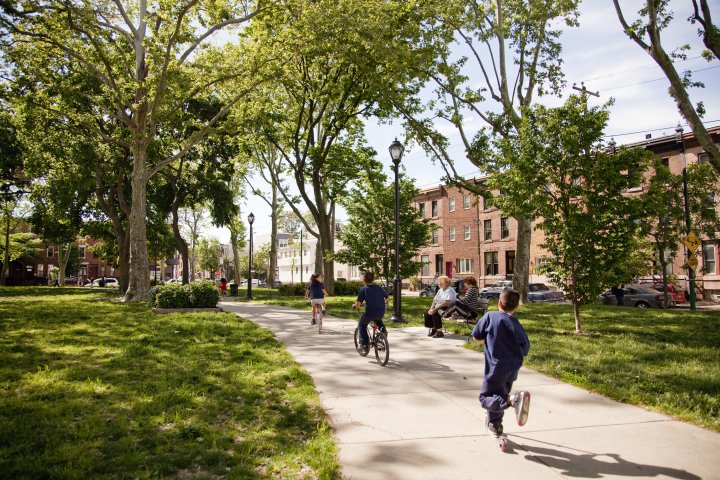 It was incorporated on its own in 1812, and became officially incorporated into the City of Philadelphia in 1854. Dickinson Square Park was named for the late Pennsylvania Governor John Dickinson (1732 – 1808). Although he opposed independence from Great Britian, and did not sign the Declaration of Independence, he was instrumental in forging the Constitution, and was present at the Constitutional Convention in 1787.

Dickinson Square Park is located on the site of the former Pascal Iron Works, which was founded in 1821 at the southeast corner of the Samuel B. Morris estate. The Iron Works faced west on 5th Street between what is now Tasker Street and Morris Street and extended to Moyamensing Avenue. From 4th Street to Moyamensing Avenue was the stockyard, which would become the future site of Dickinson Square Park. The Pascal Iron Works manufactured stoves, grates, and machine parts for sugar refineries, and had offices in Philadelphia and New York City. In 1835 with the introduction of gas to the city, the iron works became the first manufacturer of gas pipe, which until then was imported from England. The Pascal Iron Works had 1600 full-time employees that worked in three shifts, 24 hours a day, 7 days a week.

In 1896, when the factory closed and moved their operations to Delaware, the property was deeded to the city and then transferred to the Children’s Culture League. Under the guidance of Select Councilman William Vare, Dickinson Square Park was officially opened to the public on October 27th, 1900. The event was a huge celebration attended by approximately 10,000 people, including 2,000 school students marching and singing patriotic songs. It was reported at the time that practically everyone in the First Ward was in attendance. Dickinson Square Park was among the most complete playgrounds of its kind in the United States.

This “model playground” in Dickinson Square marks the transition from the “sand garden” stage of the “play movement” to more sophisticated recreational facilities for children. The impetus for children’s playgrounds came from private, philanthropic agencies whose main interest was to remove children from the hazards of the streets in crowded areas where they were subject to physical danger. Perhaps the Philadelphia playground movement can be better understood when it is realized that trolley service, and trolley accidents, commenced in 1895*. This area of Philadelphia was in close proximity to manufacturing facilities near the river, many of which are now gone.

The construction of I-95 in the 1960’s wrought further changes and displaced some residents, but the essence of the neighborhood remained intact as an established, middle class neighborhood. The district in which it’s located, Pennsport, was so named in the 1970’s as a part of of federal revitalization projects, when many then-unnamed districts were formally named.

Today, Pennsport is a racially and economically diverse solid urban community that has seen gradual change as new construction and renovation of existing houses continue.